Last winter, I shot the first film I’d ever produced: the short comedy Lovestuck, which is premiering this Sunday, March 19, at the Queens World Film Festival. Here are 11 things I learned throughout the process, from pre-production to the film’s premiere.

The author Katrina Medoff on set 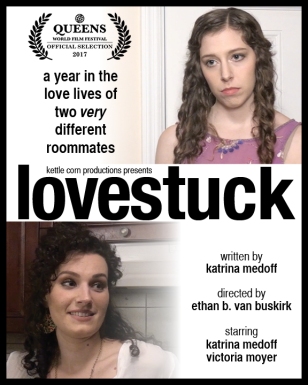 Click here for tickets to Lovestuck and other short films in the Queens Corner film block at the Queens World Film Festival on Sunday, March 19.

Katrina Medoff is an actor, writer and producer in NYC. Recent films include "Lovestuck" and "Home Invasion for the Holidays." She is also the editor-in-chief of BORO, a magazine about Astoria, Long Island City and Sunnyside. katrinamedoff.com View all posts by katrinamedoff