Illustrating the complexities of interpersonal relationships within a family when you’re a part of the inner circle takes a certain amount of gumption, especially when you are the last woman standing in a patriarchal household of a father and two brothers. Maxi Cohen is that woman and also the filmmaker of this personal verité piece, Joe and Maxi (1978). Made in collaboration with co-director and cinematographer Joel Gold, the film documents Cohen’s efforts to deepen her relationship with her father, Joe Cohen, following the death of her mother.

The first five minutes of Joe and Maxi perfectly sets the stage for the journey which commences. A brief history is covered as well as an introduction to each subject, including cinematographer, Gold, who never appears on camera but is a key character in the story, as is his camera.

Throughout this uniquely observational film for its time, the camera follows Cohen as she routinely attempts to communicate with her father. Joe Cohen is uncomfortable expressing parental affection but doesn’t pull any punches when the subject of his daughter’s lifestyle and choices arise. It’s clear that Cohen has made an alternative existence for herself and sharp familial generational differences are reawakened through the making of this film. The other women, close but extended family, seem far more sympathetic to Cohen’s desire to make art and explore a nontraditional role for herself. Cohen’s father disapproves of many aspects of her life, not the least of which is her filmmaking.

Still, despite his gripes, Joe Cohen enjoys the camera and takes delight in performing, proclaiming thoughts on women’s responsibilities among other topics. Like their relationship, the filmmaking becomes a sort of tug-of-war between Joe and Maxi. Cohen in her need to understand an emotionally remote father withstands harsh criticisms. Though Joe Cohen’s conversation is often peppered with sarcastic humor, restlessness, impatience and occasional anger, he seems to yearn for a connection too, and continues to participate in the filming. Herein lies the conflict which makes Joe & Maxi so compelling and also heartbreaking. Joe Cohen isn’t an easy egg to crack and his daughter wants so badly to form a more meaningful bond.

Not long after Cohen starts this process, she learns her father is seriously ill. The threat of losing another parent (while raising concerns about her own mortality) heightens Cohen’s need to connect and puts into question whether or not she should continue filming. 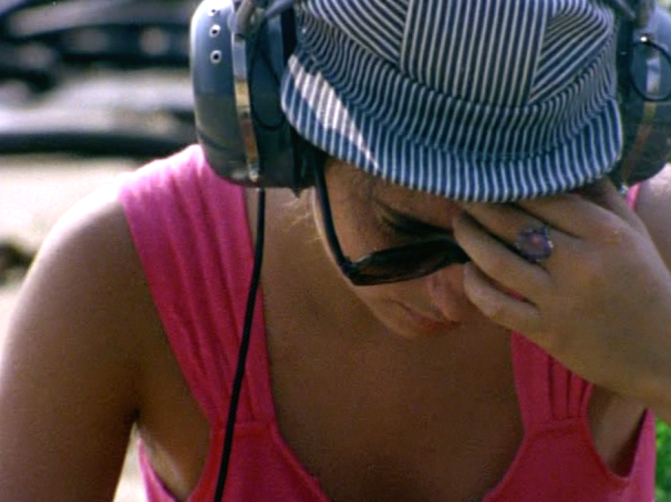 The aesthetic of verité storytelling provides an intimacy where a range of emotions confront the viewers. Allowing the camera to capture individuals in quiet moments reveals how body language, faces, eye contact or lack of eye contact can be more telling than the spoken word. Heated conversation and active scenes are present too, but Cohen finds a poetic balance. Joe and Maxi is a father-daughter story, that considers male/female relationships within a family and how those early, defined roles seek to resolve themselves as girls become independent thinking women.

While Liane Brandon’s satirical exploration of gender roles uses a starkly different process of storytelling, it is just as powerful. In Anything You Want to Be (1971) Brandon worked with public school teens to demonstrate the contradictory views of women put forth by family and society they were already experiencing.

This hybrid documentary which collages narration with vignettes by the students depicting their real-life stories, along with examples of corporate advertising, uncovers the unrelenting mixed messages imposed on women with clever and effective dry wit. Why is the subject of gender stereotypes funny? The conflicting ideas around what it is to be a woman are just as absurd as they are painfully true. Brandon knows how to sock us with a social issue while offering entertainment — a valuable educational tool.

Anything You Want to Be ingeniously depicts how difficult it is for young women to achieve their dreams against the odds. The illusion that all is possible is demonstrated to be just as damaging to one’s sense of self as the unpleasant truth, if the reality is very different.

Used for consciousness-raising, the film was a first in exploring these issues. It was a groundbreaking work of the Women’s Movement, because these questions were largely unexplored at the time.

Joe & Maxi and Anything You Want to Be will screen at UnionDocs this Sunday, May 20th at 7:30pm as part of the series From the Vault: Women’s Advocacy on Film, a co-presentation of UnionDocs and Women’s Film Preservation Fund. All films in this series were preserved by the Women’s Film Preservation Fund. Maxi Cohen will join the post screening panel in person along with Liane Brandon by Skype. The discussion will be moderated by media critic and historian Deirdre Boyle.

The Women's Film Preservation Fund (WFPF) is the only program in the world dedicated to preserving the cultural legacy of women in the industry through preserving American-made films by women. Founded in 1995 by New York Women in Film & Television (NYWIFT) in conjunction with the Museum of Modern Art (MoMA), WFPF has preserved nearly 150 American films in which women have played key creative roles. View all posts by womens film preservation fund